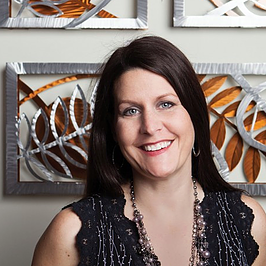 Sondra graduated from Colorado Art Institute in 1994 with a design degree. Early on, she began to explore three-dimensional design with a variety of mediums ranging from fabric to wood to wire. Her career as a metal sculptor began when she took her first welding class in 2001.

Sondra’s aluminum sculptures have an intimate interaction between shape, shadow, reflection and movement. The use of positive and negative shapes within the intricate cut of her designs cast alluring shadows that interact with the piece itself. Carefully planned out patterns and textures are ground into the surface to reflect light, creating the appearance of movement. This is the hallmark of her work.