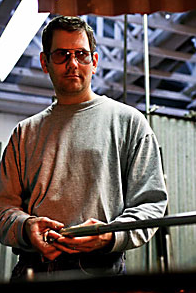 Scott began his career in art glass in 1996. His interest  in glass developed at an early age with a visit to the Corning Glass Museum. He began his arts training as a film student at Ithaca College in New York and continued at Columbia College in Chicago.

A serendipitous meeting with Charles Lotton, of Lotton Art Glass, was the impetus which led Scott to focus his talents on the world of hot glass. Charles hired Scott to make jewelry from broken glass pieces. While working for Charles, he learned basic methods, often using his free time late into the evening to hone his own craft. His first calla lily pieces were created in 1999. Scott has since developed personalized techniques that make his original calla lily, orchid, rose, columbine and hibiscus floral designs beautiful and unique.