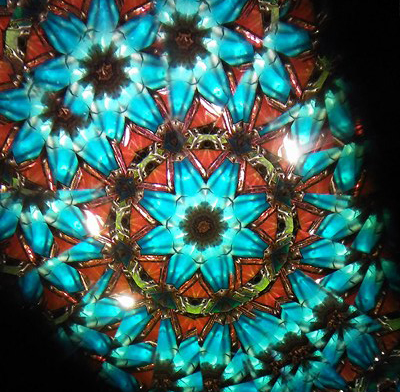 Sir David Brewster was born in Scotland in 1781. At a young age he was recognized as an outstanding scholar who was admitted for the study of ministry at the University of Edinburgh at the age of thirteen.

Brewster built sundials, microscopes, and telescopes and later, the stereoscope. His reputation on the popular level was established with his invention of the kaleidoscope in 1816 while experimenting with prisms and other optical tools.

This tube-like instrument containing mirrors set at different angles to reflect the image of loose pieces of glass and various other colorful objects created symmetrical patterns when viewed through the eyepieces of the tube. Thousands of these devices were sold as toys or instruments of amusement in London and Paris within the first few months. He was immediately delighted with his fascination device and named it using the Greek words:

During the early 1870's, Charles Green Bush began developing kaleidoscopes in the United States. His parlor type scopes in 1873 were the trend setters of that era and very profitable for Bush. These scopes are sought after as collectors items even today.  Cozy Baker, "First Lady of Kaleidoscopes," founded the Brewster Society in 1986 to provide communication among artists, designers, retailers, collectors, and lovers of kaleidoscopes throughout the world.